The awake population of Kovachevitsa has preserved the most valuable monument of its spirituality, the sacral home of the Christian faith – the church “St. Nikola “.

Built in the difficult years of the Ottoman yoke with the efforts of the whole population, it was a symbol of hope for a better life, reliance and protection from suffering. That is why they dedicated it to St. Nicholas, the protector of travellers, migrant workers and refuges as these were the roots of the entire population of the village.

The story associated with the permit for the construction of the temple, obtained hard from the Turkish authorities, turned into a local legend about a famous merchant from Kovachevitsa, who managed to get recognition as a skillful barber even in the Sultan’s Court in Constantinople. His fellow villagers addressed him asking for help, because it was impossible to obtain a building permit from the Sultan Administration – the Sublime Porte. This was done by the Sultan himself who issued and signed a firman for the construction of a church in Kovachevitsa as a benevolence and recognition of the talent of the barber from Kovachevitsa. The only condition was that it should not be high, not to be seen from afar. Therefore, the builders dug the church into the ground and observed the condition, but kept its large size in the interior. The church was completed and consecrated in 1848.

A huge three-row iconostasis fully made of wood with a very beautiful royal entrance with gilded woodcarving greets worshipers with its splendor. The twelve royal icons from the middle of the nineteenth century were created by an unknown icon painter, who has the signature of the late painters from Tryavna art school. The apostolic and festive row of icons in the iconostasis were made by other unknown painters. Two extremely valuable icons “St. George on horseback “and” St. Dimitar on horseback “, the work of Georgi Stergyuv, in 1874, from Bansko art school , are placed in wooden arcs on the north and south walls near the iconostasis. 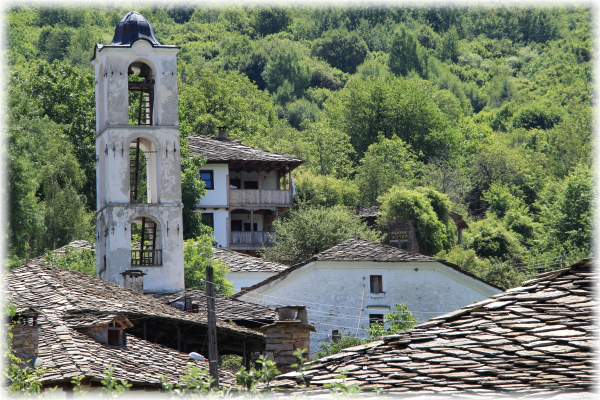 The church complex was fully completed in 1900, when the people in Kovachevitsa gained courage and also money and erected a 12 m high belfry in the churchyard without official permission. In this four storey tower they put two large bells cast by the masters from Gorno Brodi and donated by Aleksovi brothers. The first clock that measured time by hitting the clock hammer on the bells was installed on the eastern side of the tower. So the ringing of the bells with its melodic sound accompanied the people in Kovachevitsa every hour in their hard days and spread a rich tune of the two bells on holidays. Unfortunately, the clock has not survived to our times.